Killerton was an old house and had suffered many changes over the years. When it was converted for use as a 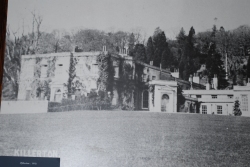 student hall or residence there were several more changes that needed to be implemented, not least of all to the plumbing services.

Probably this biggest oversight was failing to put toilets anywhere near the bar, but I notice now that 40 years on the plant life has at last recovered in the region of the garden by the doors to what is now a café!

On one occasion, the normal pipework failed to keep up with the demands of 50 mail students on a “healthy Dennis Thomas” diet. The best way of describing it – the pipes were bunged up! In terms of waste management, nothing was leaving Killerton.

Sir Richard entered the dining room during Dinner and addressed the members of the house and explained the situation. He suggested that our normal procedure used in the bar could be used elsewhere.

One person suggested this was OK for fluid disposal but there could be other waste matters that needed attention,

Sir Richard – never one to be phased – with his crooked fore finger near his lip in his normal pose, with the other arm he gave a sweeping gesture towards the windows indicating the gardens and said “Gentlemen, you must do it over Devon!"

Around the same time another water related problem arose. This time connected to the general hygiene of the gentlemen in residence. The ablutions of 50 men necessarily require a supply of fresh water, and when that is being drawn often by the bath full this this is a lot of water. It had not been appreciated prior to the influx of student residents, but it transpires that the house water supply was from a header tank. The supply to the house was insufficient to keep the tank topped up. In a very few weeks, turning on a tap in the House produced a gentle trickle of water as the reservoir was exhausted. Devon Fire Brigade was called in to rescue the situation by pumping water to top up the tank until changes to the supply system could be made.

Elsewhere on the site, I have mentioned the heating arrangements that were available in the student bedrooms, ie two and three bar electric fires. In the first couple of winters that Killerton was occupied by St Luke's Students, these proved to be adequate, but  as most home owners know, the cost of heating using electric fires is expensive. This came to the notice of the powers that be and something had to be done. The solution was that one day, whilst the residents were busy in their normal studies at College, a heating element was removed from every electric fire in the house!