I hope that Edie's in Bradnitch hasn't changed too much. I seem to recall that they had a piano player with dreadful arthritis in his fingers which limited his repertoire somewhat, but we didn't seem to need a piano player for most of our songs.

I remember drinking pints of 'dry' and eating the most basic of ploughmans which consisted of a doorstep of bread, cheese to take the lining off the roof of your mouth and a few pickled onions. I think she charged 4 new pence for the food.

But it was a pub with a difference as she would give you a bill for the whole lot at the end of the evening which I think she calculated on how pissed you seemed. Some inexperienced drinkers ended up paying over the odds as she assumed they must have consumed vast amounts of cider.

I'd like to think that they subsidised my drinking as I can't ever remember being carried out of there.

The other thing I remember about driving down there (which I suppose means somebody also drove back) was stopping on a little hump-back bridge in Mimsy Morgan's (1973-76) Ford Pop. The other car with us also stopped and we staged a massive 'fight' as other traffic queued to watch. A couple of people went over the bridge into the stream, we all got back into the two cars and headed on to Edie's as if it were the most normal thing in the world. 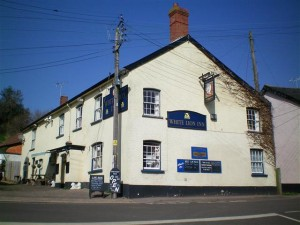