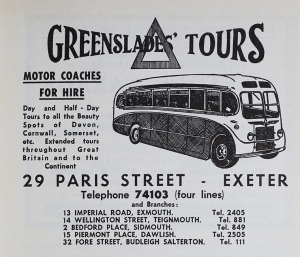 The 1971 Luke's Loughborough match at the Stoop Memorial Ground was my first experience of a away rugby match.

In the midst of the three day week the game went ahead and the Killerton Boys got themselves organised.

A coach was booked and left from Killerton car park early Friday afternoon - complete with crates of beer surreptitiously placed on the rear seats. Singing, drinking and general merriment ensued. Sir Richard decided to travel with us on the coach and, much to the drivers annoyance, when we asked him to pull over to the roadside for "a comfort break" Sir Richard was amongst those lined up against the side of the coach.

I don't recall much of the trip other than as we passed through London, we pulled up at a set of traffic light at a junction and Sean Noe suddenly jumped up, ran to the front of the coach and shouted back  "I live just up the road". Without further ado, he opened the door, crossed to the pavement  and disappeared into crowds.

Taff had arranged accommodation at a hotel in Leinster Square. When we arrived we were assigned rooms where we left our belongings, and as far as I can recall, most of us spent most of the evening in the bar of the hotel.

The following morning a game had been arranged against Kingston. One of Taffy Thomas' friends was studying at Kingston College and a rugby match had been arranged there for the morning. We were taken by our coach to Kingston but the  game had been cancelled. However, not to be disappointed, we were entertained in the clubroom until it was time to get on the coach for the trip back to the Stoop Memorial Ground.

The details of the match are better reported elsewhere. St Luke's did lose by a very small margin, though the report in the papers the following morning suggested that whilst the game may have been taken by Loughborough, the support and the singing was very much won by St Luke's.

That evening many people decided to go for a meal at a carvery in/near Trafalgar Square. I tagged along, but being a vegetarian I chose not to go to the Carvery, but instead wandered the streets till I found a chippy. I did return to the pub to catch up for drinks later.

Taff had chosen Leinster Square for its proximity to Hyde Park, so on Sunday morning, and after breakfast we took a slow walk to Speakers Corner. The coach was to meet us there at noon.

By 12 o clock, all had gathered on the corner opposite Marble Arch, all except Sir Richard. He had been staying with his son, Henry.

The Coach arrived, but still no sign of Sir Richard.

The coach was waved off and told to go round the block.

Thrice round the block and eventually we had to board the coach and leave - police were eyeing us suspiciously.

The trip home was worrying. Had we lost a knight of the realm? What would Lady Anne say? What would the College say? Taff was convinced his time at St Luke's was at an end.

As we drove up the drive towards the House, there was great relief to see Sir Richard and Lady Anne on the steps waiting to greet us. He dismissed our apologies for leaving him. Apparently he had been on the roof of the Odeon Cinema opposite Hyde Park, waving at us. He saw us leave and took a cab to the station and caught a train to Exeter. Lady Anne collected him from the station.