Snow! Not a problem when the Jug Bandsmen are involved

Haden, Pete Cyphus and I were based in Callington and Gunnislake for our final practice, which took place in the spring term, and lasted eight weeks.

It was a Friday evening, and the Killerton Folk Club was to be held. Haden was in the jug band and I was also performing a couple of songs.

Snow had been forecast so we headed off as soon as possible.  Soon enough the radio was informing us that conditions across Dartmoor were deteriorating and that several routes were already blocked. Undeterred we carried on.

Soon we came across deeper snow and several abandoned vehicles. It was already dark, but Haden devised a way by which we could continue on our journey. Haden was driving a Morris Minor 1000, some emptied the boot of our luggage onto the back seat and Pete and I clambered into the boot to increase the traction. (For those who have forgotten, the Morris Minor was rear wheel drive and had nice narrow tyres!)

Soon we were rolling along past stationary traffic without a care in the world, other than frostbite. We got some very strange looks from the stranded motorists. Once over the moor, we were able to resume our more conventional seating arrangements and continued towards Killerton where the snow was already causing problems.

Unknown to us, my Fiancée and some of her friends had made their way to Killerton for the folk club. (They had left Rolle before the weather got so bad) By the time they had arrived the Folk Club had been cancelled as it was presumed nobody would get there.

Eventually we arrived at Killerton, much to the amazement of the other students.

Of course, we then had to try to work out what to do with the three waiting female students!

No doubt some females have spent the night at Killerton over the years, but probably without the knowledge of the warden. However, this time their presence was known about. A visit to Sir Richard was necessary. Amazingly, he and lady Anne were very understanding and found beds for the three in their flat!

The following morning, before breakfast, I collected them and took them down to breakfast.

You can imagine the faces of the sometimes quite scantily clad Killertonions on arriving for breakfast to find three young ladies tucking in to breakfast!

I believe this is the only time that young ladies have legitimately overnighted at Killerton.

My then fiancée, Eileen and I have been happily married for nearly 47 years, so no harm came of the adventure! 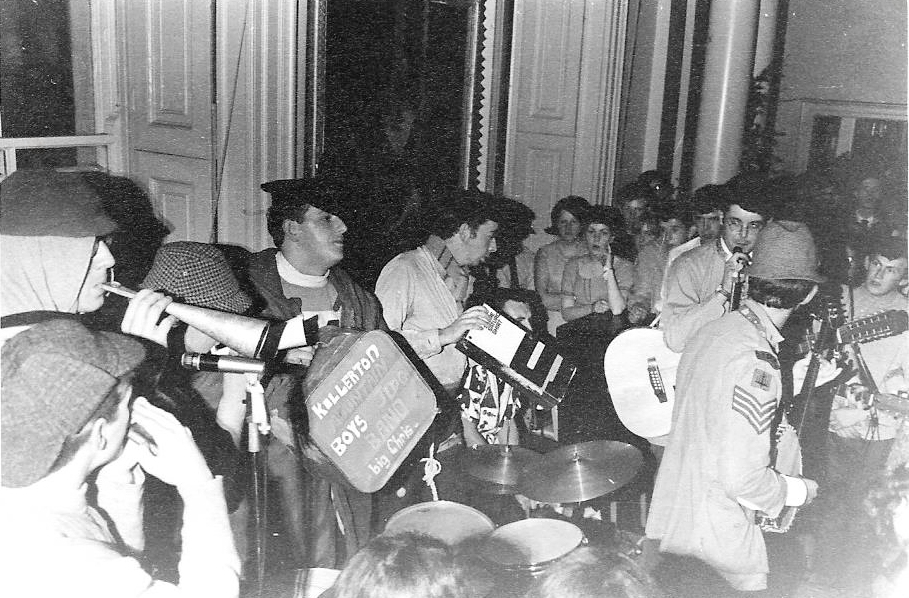 On a different occasion, The Jug Band shows Chris Davies holding the oil can (Jug) with the band name on it, Ian Jones is on his left, Dave Treharne is on 12 string and kazoo and I suspect we can see the back of Pete Holman with the sergeant’s stripes.