Vijay's links to the Underworld

Vijay suffered one of the experiences we all dread. Whilst away from home for a few days he received a phone call from his sister asking if he had arranged for his car to be taken to the garage, as it was no longer on the drive where it was normally parked. Of course, he hadn’t arranged any such thing - the car had been stolen. 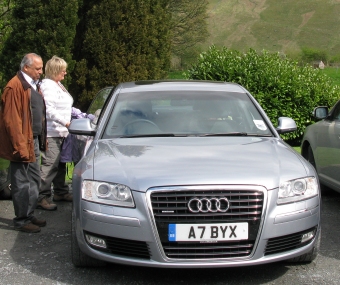 Vijay’s car, an Audi A8 with all the toots and whistles, was a real showpiece, so he was pretty upset about it's unexpected departure, cut short his trip and hightailed back to London; first: to check it was really missing and not just hiding in the hedgerow and second: to report the theft and make an insurance claim.

Oh the joys of insurance! After a lengthy face-to-face interview with a private investigator and handing over the car key (only one could be found), the loss adjuster decided that Vijay was somehow involved (he being a well-known criminal mastermind in the car thieving world). The contention was that car could only be stolen using a bona fide electronic key (ie. Vijay’s). Actually the police reckon a tow truck and a lot of bottle is just as effective.

Eventually after a lot wrangling, including several exchanges of letters, emails, telephone calls, and eventually a solicitor’s letter threatening to take the insurance company to court for the money and defamation of character (yes really, defamation, don’t laugh) the insurers paid up and Vijay was able to get mobile again ... but that’s another story involving Steve, Vijay, a hired BMW that they mislaid, and the Frankfurt Motor Show – but we’ll save that one for later.

While the brouhaha with the insurers was going on, Vijay discovered his trusted, seemingly innocent Audi had taken up a second career – as a getaway car. One day there was a knock on the door and a couple of detectives were there asking if our Vijay had any links with the Isle of Man. As some of you know, Vijay has a business interest on the Island so he came clean – but with much trepidation ( … when the police arrived he had been looking out of the window. Had someone been watching when he'd had that funny turn and thrown all his clothes off and run along the promenade singing Tottenham Forever? Surely that had just been a dream!)

Ah well, nothing so exciting, it turned out the detectives had been talking to all the owners of Silver Blue Audis reported stolen – as a car of that description had been involved in a bank robbery in South London. A couple of men had been waiting for the armoured car to turn up outside a bank with the box of cash ready to install in the cash point machine. The robbers had arrived in a BMW, waited for the security men to take the box into the bank and then made their move. They went in, over powered the security men and took the money box to the waiting getaway car – a Silver Blue Audi A8.

As the thieves got into the getaway car an “Isle of Man - Ferry Executive Club” sign fell from the door pocket of the car and was later picked up by the police. The car, the cashbox and the thieves disappeared in a cloud of dust, but at least, the detectives had a lead to the owner to the car. Vijay was the only owner of a stolen A8 who had the IoM connection.

The police were also able to tell Vijay that in the best Ealing comedy tradition, the bungling thieves had managed to steal an empty box, the one that was removed from the cash point machine, not the full one…

As an end to the saga, just over a year later, the police contacted Vijay again (no, not about imagined nefarious nocturnal wrongdoings). This time the detectives had to report that his car had been found - over on the Costa del Crime in Spain! They wanted to know who now owned it, Jeannie tried to lay claim on the basis that the Audi had always been her favourite, but sadly, Vijay was only too happy to pass the problem of the his criminal car over to the hapless insurers.