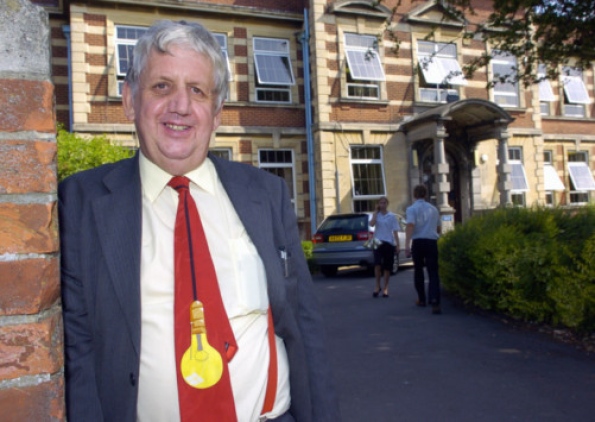 Gerry taught at Mayfield School in Portsmouth. I taught there with him for 5 years and didn’t realise he’d studied at St Luke’s never mind that he had a Killerton link.

I noticed his name in one of the emails people had sent me. The name was so conspicuous the chances of there being two teachers with the same name was very unlikely. I finally got around to sending a letter to Gerry to ask if he had attended St Luke’s and to let him know about the website. I think the letter arrived the day after he died.

Gerry had been assigned to Killerton but due to his main course of study being Religious Studies, it was felt more appropriate if he moved into one of the on-campus halls so that he could attend the regular church services.

The following articles appeared in the local news paper

HE has been described as a legend who made school fun.

Warm tributes were paid today to Gerry Oldfield, a teacher from Portsmouth, who touched the lives of thousands of people with his unmistakable charm, wit and dedication.

The 66-year-old, of Elm Grove, Southsea, died suddenly on Thursday from a suspected heart attack.

Gerry was a teacher at Mayfield School in North End for almost 40 years, first joining the school as a PE teacher and later in life teaching religious education. He moved to Portsmouth from Nottinghamshire and spent his early career at the former St Luke’s School in Southsea.

Taylor Rogers, 20, of London Road, North End, attended Mayfield and had very fond memories. He said: "He made everyone feel part of the Mayfield family. People have come to pay tribute to him from all over the world. ‘It’s quite a shock – I  don’t think anyone really expected it. The thing about Gerry was he taught thousands of pupils but he always remembered you. He had a great memory for names."

Pupils have fond memories of the games of cricket he would organise during the summer.

Gerry was a Conservative Party member and fought in several city council elections in the last few years, including Eastney and Craneswater, Charles Dickens and Fratton.

Goodbye to the Southsea teacher who made school fun

MORE than 250 people crammed into a church in Old Portsmouth to say goodbye to a well-known teacher described as a ‘living legend’.

Tears were shed and laughs were shared as people celebrated the life of Gerry Oldfield, who died unexpectedly at home before Christmas at the age of 66.

Gerry, of Elm Grove, Southsea, was a teacher at Mayfield School in North End for 36 years and several generations remember his fun and imaginative classes.

The mourners at John Pounds Memorial Church included a wide spectrum of people, including schoolchildren past and present, fellow teachers and governors, relatives and Portsmouth North MP Penny Mordaunt.

His coffin, which had white roses and a cross on top of it, was carried in to Nimrod, by Sir Edward Elgar.

The Very Reverend Paul Miles-Knight, parish priest of the community parish of the Holy Angels of Portsmouth, said the congregation had come together to celebrate the life of a ‘special and remarkable’ man who had touched the lives of countless people ‘just by being himself’.

He said: ‘He would have wanted us to smile because that is the kind of person that he was.’

He said Gerry taught religious education, history and PE and aimed to inspire pupils with his teaching.

Gerry had always felt that imagination and creativity had somewhat been lost amid the need for children to hit targets.

‘It was a vocation and duty he carried out with incredible distinction.’

The service heard how Gerry retired in 2006 and learned to drive at the age of 60.

He continued to help with the education of children, becoming an active governor for Cottage Grove, Somers Park and Newbridge junior schools and an archivist for Mayfield’s 80th anniversary.

Gerry loved classical music and he had a collection of between 5,000 and 6,000 discs.

Rev Miles-Knight said he would be remembered for his ‘wonderful sense of humour’, adding: ‘How many thousands of people can say “thank God for Gerry Oldfield”.’

The coffin was carried out to Land of Hope and Glory. There was a private cremation after the service.