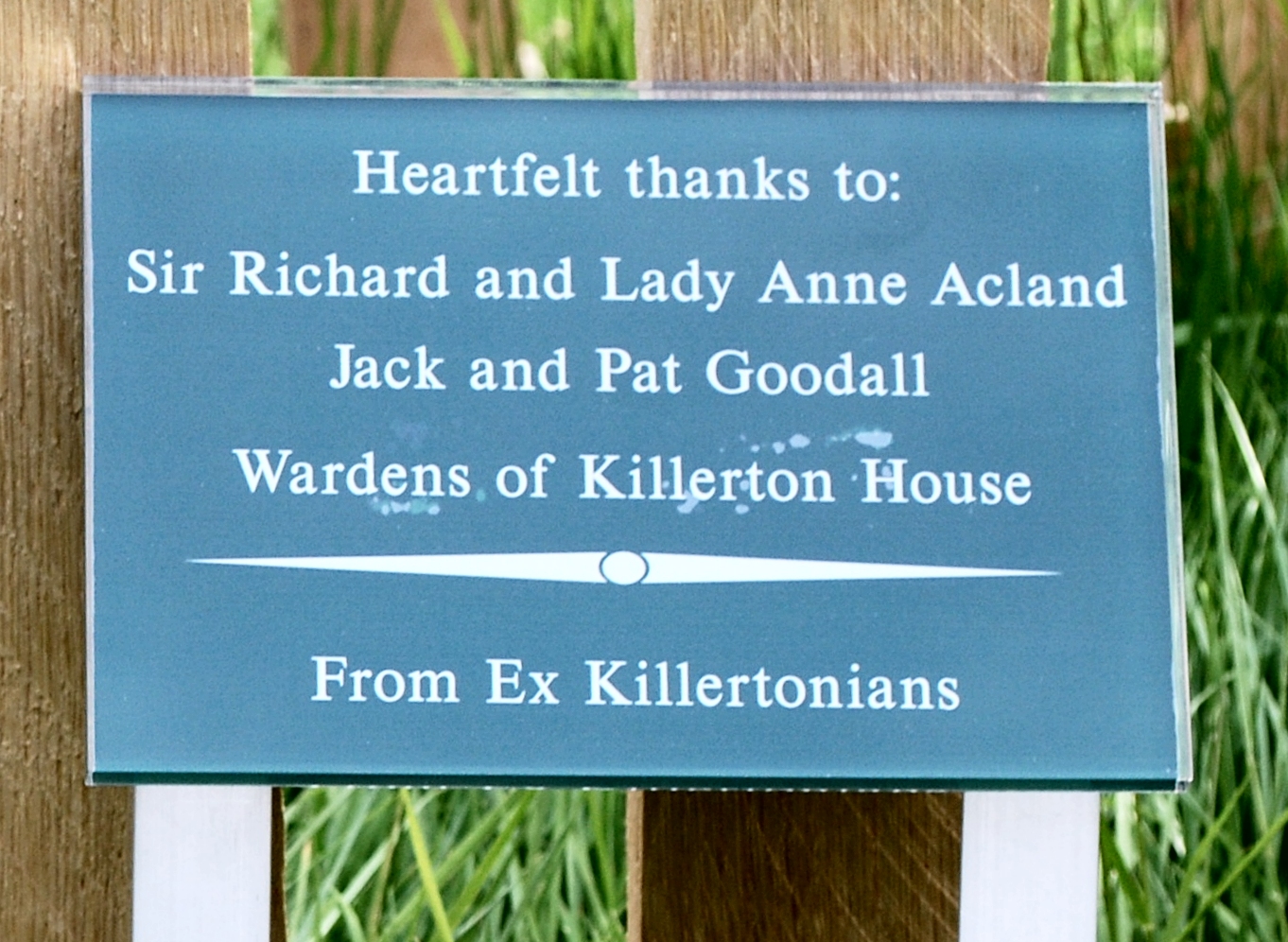 Thank you all for coming, Thank you especially Denise and Samantha for taking such an interest in us and our times here. Thanks to Dave Jolly who has been tending the trees for us, and to James for taking the time to come along here and be with us both in March and today.

A lot was said in March when with James’ blessing, we first planted the trees. We remembered Sir Richard and Lady Anne and the way they took us, amongst many others, into their home and treated us like an extended family! We also gave thanks to Jack and Pat who took over from Dickie when he retired.

We mentioned Keith Derbyshire, Shaun Noe, David Kitchen, amongst others who have passed away over the intervening years. There are tributes to them on the website.

One person who did so much to make the event so meaningful in March was Neil Blewett. It was unfortunate that Neil was unable to make that meeting. He had had an operation to his hand to relieve a condition known as Dupuytren ('du-pwee-trann') Contracture. He was supposed to be on 10 week convalescence, but by March the 6th he was back at school on “light duties”. One of the reasons he was unable to get to Exeter in March was the wound on his hand made driving uncomfortable, the other was that he was going to be in work, on the Friday evening dealing with a school event, and both Saturday and Sunday assisting with a Rugby Tournament.

Living only three miles from Neil, it is staggering that he and I did not meet up socially sooner. I had seen him occasionally at functions at his school when my neighbour's children were involved. He was always the first to come up and greet Chris and me and we would always promise to get in touch ... but never did, until last year when we decided to try to contact other Killertonians. A single email to his school received an almost instant reply from him.

From the first contact, he was eager to get together to meet up with us again. He provided a number of contacts for ex killertonians. It was he who contacted the National Trust and Denise to see if they would be willing to meet with us – something that was equally eagerly accepted. He went on to arrange for us to visit Kiillerton so successfully last year.

When Alan suggested we approach he NT about planting a tree as a memorial, it was Neil who once again contacted Denise, and then James and helped to plan the planting in March.

It was a great shock to me personally when I heard of his death; I found it near impossible to write anything on the website for several weeks, the best I could manage was to offer other people’s words – initially those of the Headmaster of the School.

I was going to read some of the comments others had written about Neil, but it is easy to go on about how sad we are about the loss of someone, even someone as special as Neil – or David, Shaun, Keith Sir Richard, Jack ..... The reason we are here is to celebrate the good times we shared while we were at Killerton; the camaraderie we experienced then clearly had a lasting effect on us ‘cos we’re all her today!

The final words on the plaque (for those who forgot to bring their glasses) are a mis-quote from a famous band that once played at a Killerton barbeque “... even the bad times were good ...” maybe that quote should go over the main entrance

Dave Robins: What a dreadful thing to happen ... Neil was a really nice lad. I’m at a loss for anything else to say..
John Davies: It's a great shock, a sad loss and a reminder to all of the fragility of life.

Pat Barret: I was speaking to him earlier this year and we talked for ages, covering loads of ground. It was a pleasure to chat to him again and it brought back a lot of good memories of when he and I shared a room at Killerton. I'd seen him in the first years after college too as he went to my old school in Portsmouth but we'd lost touch until this year. It's very saddening to think that so soon after making contact again, he's gone. He was a lovely person and the world will be all the poorer without him.

Nigel Webb:  was very sorry to hear the news about Neil. It's funny how many people who knew Neil. (Colleagues who went to St Johns, a colleague whose husband teaches at PGS, a colleague whose daughter is best of friends with one of Neil's daughters). The threads of life are quite strange.

James Theodosius: It really is deeply saddening to hear of the sudden death of Neil Blewett - you must all be desperately shocked and not quite knowing what to think. Neil very kindly rang me to thank me for attending the Killerton event and strangely, just as an aside, mentioned retirement and in the same breath, 'should I last that long'. Over the telephone, which was my only contact with him, I found him a wonderfully generous, thoughtful and considerate man who was dedicated to his job and certainly seemed to love his vocation. He was extremely warm and joyful when recounting his time at Killerton which had had a profound influence upon him - as with you all.

Derek  Heath: It came as a big shock to hear about Neil's death.  As I have not seen him since we were at Killerton my lasting memory of him is as a rosy cheeked bright eyed young man who had a gentle nature and was well liked by all.  What a sad event.

Roger Dickson: Vijay Daswani: I still can't believe this could have happened to dear Neil, a true gentleman and good man, whom I used to tease for looking so young.  It was a delight to catch up with Neil last year, after 35 years, and not once, but twice.  A charming, true gentleman who I only ever saw smiling; a good man, who I will remember with great fondness and affection.  R.I.P. Neil.

Neil you will be missed by many people. So pleased we met up again just last year in Killerton Gardens and again at the Trinity Schools' Athletics in Portsmouth.
Happy memories.

A tribute sung by the Head of Portsmouth Grammar School at the Memorial Service held in Portsmouth Cathedral and attended by ove 1500 staff, students, family and friends:

Standing under the Main Archway

Taking note of the lates and the stray

Ready as the busses pulled in.

I was listening for you today

For the phrases that you used to say

“Err no; I don’t think so – non regulation

Make sure that shirt is tucked in.

Make sure that shirt is tucked in.”

Made us know we belonged:

“Make sure your shirt is tucked in.”

Showing us all what to do

And smiling ‘cos we didn’t have a clue.

Made us know we belonged:

And smiling ‘cos we didn’t have a clue.

Blowing balloons up for Open Day

Putting on a bit of a show.

I was listening for you today

As the referee’s whistle stopped play

Or starting the races on Sports Day:

Made us know we belonged.

The start you gave us, only we’ll ever know:

The start you gave us, only we’ll ever know: 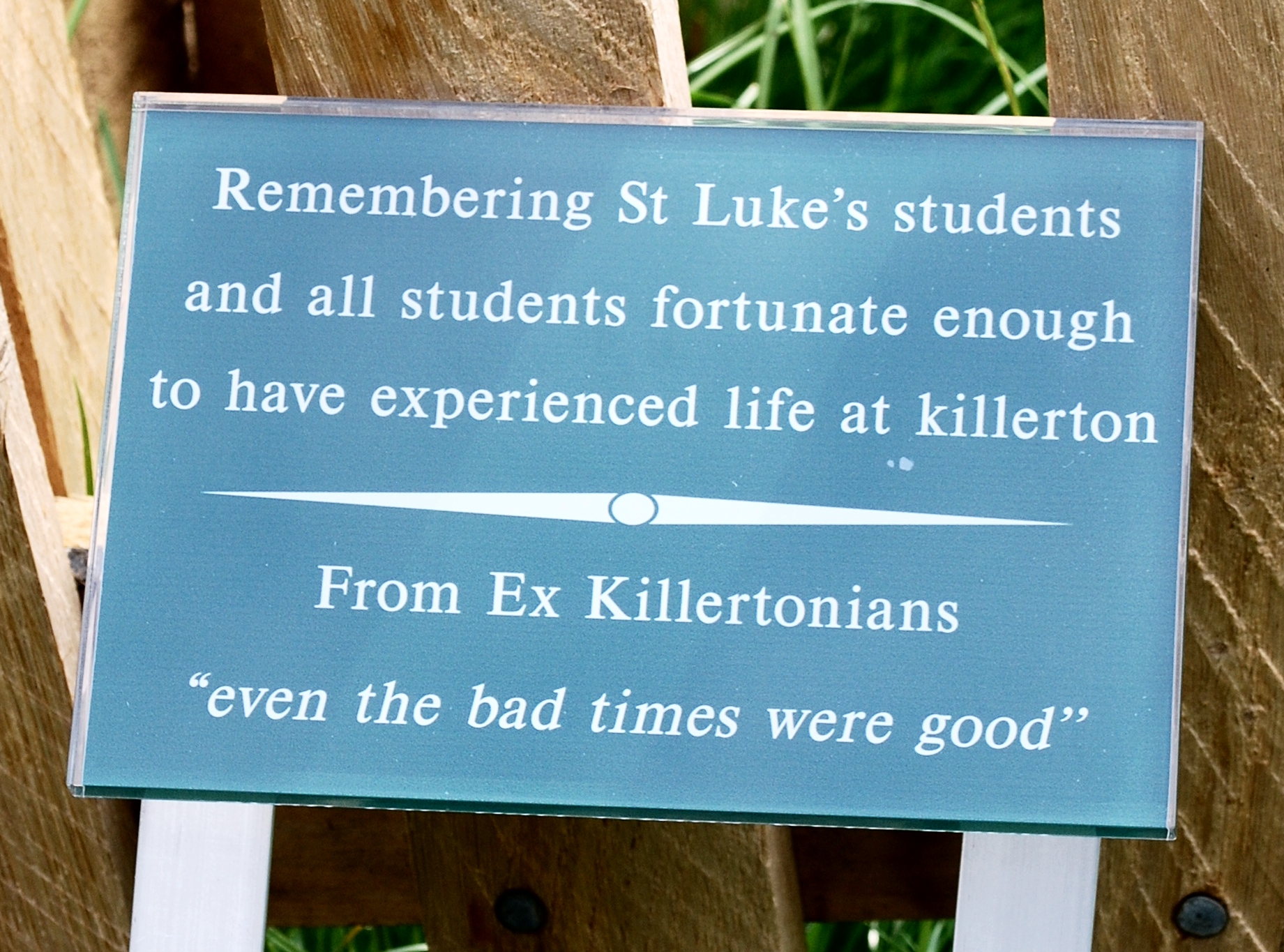