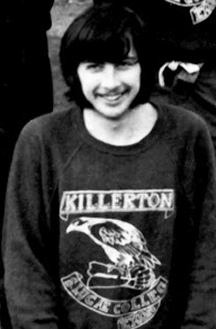 One of the dozen or more innocents who arrived at Killerton in 1969, he became one of a core of four (CH, MF, JP et moi, DJ) who went the whole three year hog in that glorious environment. There was a ‘fifth’ partner in this unit that helped unify this social group - more of that shortly.

His sudden death on 17.09.21 at the age of 71 was a complete shock and came just weeks before the death of Malc Fisher.

In truth, few people ever called him Chris, because those closest to him stopped using it after 2-3 weeks and was renamed Oggie. Yes, there were a few other students from that neck of the woods during those three years, but none of them embodied 'Cornishness' like Chris.To us, he was the definitive Oggie.

Oggie was born and raised in St Mabyn, where his parents ran the local post office. Apart from his three years at Killerton, he spent his entire life living and working in Cornwall, a place that he considered to be the last true English County. Ever proud of his roots, he never once expressed desire to live anywhere else.

During his first months at college, Oggie remained a bit of a mystery to most as he kept disappearing home at the weekend. Thus, he was a bit of a slow burner, and it took him that bit longer to establish himself in the Killerton social mix. Regardless, of that, during those early days he was, in fact, quietly sizing the rest of us. In typical Oggie fashion, he took his time.

If truth be known, his trips back home were not without purpose and before long the name, Jane became part of the conversation. She, and daughter Kate, have been part of every conversation ever since. Sadly, his death came just months before their Golden Wedding Anniversary.

As soon as his relationship with Jane started to blossom, his trips back home grew less frequent, and he began to immerse himself more and more into Killerton life.

Oggie, by nature, was keenly competitive, and threw himself into every and any activity. On the football pitch he was quick and nimble but he also relished the opportunity to learn how to play rugby. He loved running with ball in hand, dodging any would be tacklers. All very good, but in doing so, he often seemed to forget where the opposition try line was. Trying to support him at times was bloody hard work!!

Whether it was discos, folk clubs, the famously popular annual barbeque, Oggie loved them all and always pitched in. It was a busy life! He very much found the bar to his liking, enjoying the socializing, the beer, bar games singing, birthday celebrations, and the general mayhem that was a constant. He supped his fair share of ale and spent many happy hours there.

His favourite bar game was 'Buzz', at which he excelled. He always wanted to play the very complex 3,5,7 version -   Phiz, Whiz, Buzz. Few   could compete at his level and the faster it was played the more enjoyable he found it, as he   cajoled and confused opponents into making   mistakes. Penalty Mr Chairman!!

But you had to be wary of the eye! Not a pretty site........ that long, hard stare. Mostly, it was put to good use when winding someone         up………something he would do whenever the opportunity, especially if he was bored. He just could not help himself! Watching him in   action was so entertaining.

But now is the time to confess that Oggie's most infamous role was playing the ghost of Killerton. He assumed this role in his second and third years when the new, and generally younger, intake arrived. Naive, impressionable freshers who lapped up tales of ghosts that roamed the halls at night. They'd happily listen as he regaled them with his web of porkies about these restless souls who could not find peace.

The library was the setting, and as you’ll recall, it was conveniently situated further down the same wing as the bar,   easily accessible via   the garden doors.

On dark nights, and after suitable refreshment, Oggie would meander along the wing to see if a potential victim was alone, using the library for some academic purpose......

Oooooooh....The low moaning and the finger scratching of glass would start, gradually increasing in volume and   tempo..........Ah! Was that   a twitch? Yes! A sense of unease? He'd ramp up the sound effects.......The number of   frazzled students who ended up bolting out of the   library, books and papers abandoned.

Belated apologies to those who were affected by his antics, but his victims never confessed to being spooked in this way. Unfortunately for others, this only meant Oggie had an almost endless source of potential targets......

Ironically, Oggie was more a meat pie than a pasty man. Over the years we have often reminisced about the tea shop in Broadclyst, which sold the most amazing meat pies. But not just any old steak pies, these were proper steak pies, full of the most tender pieces of meat, bathed in that rich, dark gravy. The hours we’d gorge on those delicious treats, munching and salivating in silence. Proper Homer Simpson moments. Mmmmmm!

In those days, having a car as a student was a luxury few could afford. And the ‘fifth’ member of that group was Oggie’s trusted Morris   Minor which was to become an integral part of our lives. That car could have told a few tales.

As well as daily use to and from college (with frequent pauses to visit the pie shop on the return journey), that car provided a wonderful free taxi service - a heaven sent means of getting out and about, exploring the neighbouring towns  and their pubs! At times the car could get a wee bit crowded....

The record was 13 who piled in for a quick pint or two at our favourite 'local' in Silverton. More remark 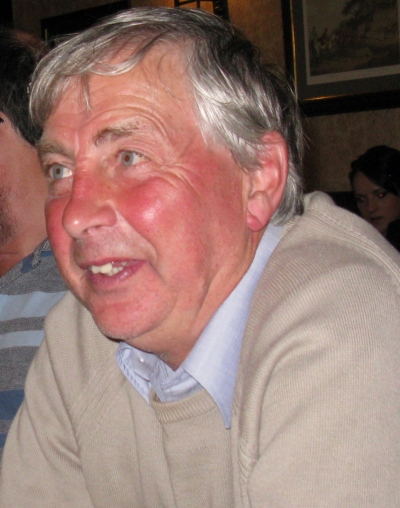 able was the return journey, some hours later, accomplished without mishap, but what a bumpy old ride in the boot! However most, if not all, journeys thereafter, were only undertaken with a legal payload......most of the time!

Over the years since Killerton, Oggie stayed true to his character.

He loved Cornwall and embraced Cornish life to the full. He would have happily cut Cornwall adrift from the rest of

England and the older he got, the more he developed a staunch dislike of tourists who, in his opinion, sped recklessly down what he saw as his private highway. He always wanted pop festivals, G7 summits and any other potential Covid spreading events etc. to go elsewhere.

Over the years since Killerton, Chris seemed to outgrow his Oggie persona, and I decided that he be awarded the he   needed higher   recognition and awarded him the honorary title ‘Lord Bodmin’. It seemed far more appropriate, and in true Oggie style, he never objected!

He was passionate about his heritage, his life, his family, walks with the dogs, haymaking, hay-baling, playing bridge, driving down the lanes in his tractor as slowly as possible , booze cruises to France and, of course, his beloved winecellar which he waxed lyrical about over the years. Jane told me recently that this 'vast' collection of fine wines was just some bottles in the cupboard under the stairs........Yes! Just another of Lord Bodmin's mischievous elaborations.

And so, Lord Bodmin, I bid you a final farewell my good friend. As JP would say, 'Gonna miss you, bud.'  Hope you got past the gate without   upsetting Peter and that you have found the bar. I trust the beer is up to scratch.

I can hear your rich, resonant laugh as you boom 'AB-SO-BLOODY-LUTELY’ down the telephone…….I'm so gonna miss that. Gonna miss a lot more, my dear friend. ‘Thanks for the Memories’