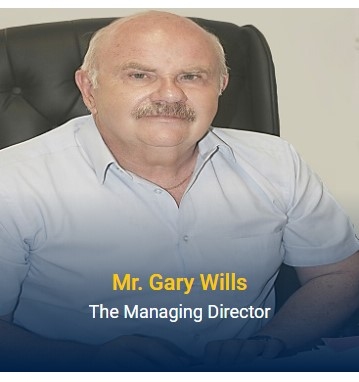 It is with regret that the Board and Management of Livingstone Kolobeng College informs its stakeholders and the general public of the sad passing of our Managing Director Mr. Gary Michael Wills.

The Late Mr. Gary Michael Wills made invaluable contributions to the advancement of Science Education, Teacher Training and Educational Publishing in Botswana.

He was born in Poole, England on the April 5th 1951 and began his career as a Science Teacher at Tavistock Comprehensive School in Devon, in 1973 than teaching at Seldon Secondary School in Dorset, where he became the Head of the Biology Department.

Nineteen Seventy-Six was a major turning point for Mr. Wills. During the year he completed a combined Bachelor’s degree in Biology, Science and Education and was awarded associate membership by the Institute (now Royal Society) of Biology in London. In the same year he responded to a call from the British Official Development Assistance (ODA) International Programme for teachers to serve in Botswana. This resulted in him being posted to Kgari Sechele Secondary School in Molepolole from 1976-86, where he served as the Head of the Science Department.

While in Molepolole he also authored “A Handbook of Science for Science Teachers”, served as an Assistant Examiner for JC Integrated Science and Human Biology and was a Committee Member of the Botswana Science Association.

From 1986 to 1988 he taught Biology at St. Joseph’s College, Kgale, while serving on the Curriculum Review Committee for both Junior Certificate and Cambridge “O” level Science. During this period, he was also engaged by the Department of Non-Formal Education as a course writer in Biology and Human Biology.

After returning to the UK 1988 Mr. Wills earned a Master’s Degree in Education (Science & Technology) at the University of Southampton, where he had previously, in 1985, earned a Certificate in Curriculum Design and Management. His 1989 thesis was entitled: “A Consideration of Some Language and Cultural Influences on Children’s Ideas and Learning in Science”. While back in the UK he further taught Sciences at Lytchett Minster Upper School, 1988-89, and Alenbourne Middle School, 1989-90, both of which are located in Dorset.

In 1991 Mr. Wills returned to Botswana to become a Lecturer and Regional Teaching Practice Coordinator in Science and Science Education at the Tonota College of Education, where he published a paper on “Language Issues in Science”.

In 1993 Mr. Wills took up the post of Assistant Deputy Head responsible for Exams at the then newly launched Legae Academy, where he also taught Biology and Agriculture. In October 1993 he presented “A Model of Classroom Management” at the Boleswa Conference on Research in Mathematics and Science. From 1995 to 1998 he returned to teacher training as a Lecturer at the Molepolole College of Education.

In 1998 he retired from daily teaching to co-found Tasalls Educational Publishing and Books, authoring and co-authoring a number of the company’s publications. He stepped down as a Director in 2002, after the company was purchased by Longman. During this time, he also became better known to the general public for his education focused contributions that were published in local newspapers, most notably his educational supplements that appeared in the Botswana Gazette.

At the beginning of the new century Mr. Wills joined hands with a number of other veteran educators in working towards the establishment of a new independent international secondary school in Gaborone whose innovative approach would be reflective of his own progressive educational values. In 2006 this effort was rewarded with the opening of Livingstone Kolobeng College (LKC) with Mr. Wills as its Managing director. The school has since established itself as a leading regional institution for University of Cambridge IGCSE & Advanced Level Studies.

In recent years the Mr. Wills further took an especially keen interest in the development of the LKC Jaguars Rugby Team at both school and Canon Jaguars club competition level, taking part in the college team’s 2016 Welsh Tour.

He will be missed by many.

May His Soul Rest in Peace