I had a motorcycle licence since I was 16. My first motorcycle eventually died, Si in 1968 I bought an old BSA A10 Goldenflash complete with sidecar. Unfortunately, in 1969 I was been involved in an collision with a car. A couple of weeks in hospital, lots of physio and a repeated second year in the sixth form.I was left with a paralysed right arm.

In view of my injury, during the year prior to coming to college I had surrendered my full motor cycle licence and taken out a provisional. I had rebuilt the BSA and fitted it with a foot operated clutch, moved the front brake and throttle to the left hand handle bar and fitted flashing indicators. Thus I was mobile again. I also painted it Pink! 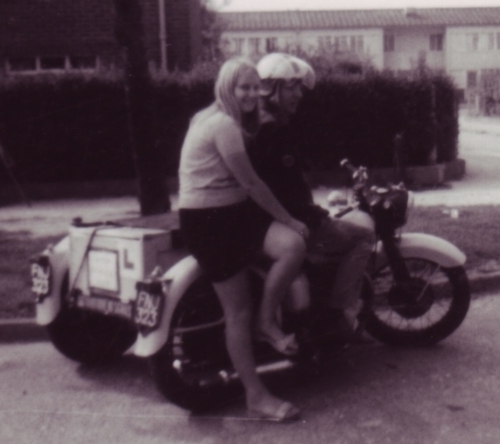 This was the vehicle I turned up at Killerton on in September 1970.

I rode it to college every day for the first term and home to Portsmouth at Christmas. In the January I rode back to Killerton. It was freezing - literally.

I stopped in Dorchester and went to a cafe for a cup of tea. I looked down at myself. The front of my jacket was white with ice. I wasn't able to pay for the tea immediately, I had to tell the chap I'd give him the money once my hand had defrosted.

I sat down at a table with the tea, blinked, and a lump of ice fell from my eye lashes into the tea!

I continued on to Killerton after I'd warmed a little but the novelty of driving in that sort of weather was wearing off!

I rode the bike home at Easter and I have to confess, I didn't ride it back in the summer.  I started driving lessons and took my driving test in a car. I became the proud owner of car a car in the summer and returned to start my second year at Killerton in the Zodiac.

The BSA stayed in the garage at home for a while, and then moved around with me for several years but it never went on the road again. It was only recently that I was able to part with it. It has gone to a friend of a friend who is currently rebuilding it - 45 years on!.