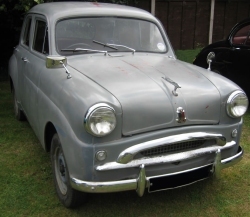 The car was decorated with a large number of sticky flowers, very hippy.

It was probably one of the least reliable cars to arrive at Killerton and Phil was certainly a person to avoid when lifts were being sought and you needed to get into college.

The car went well enough, it was just reluctant to start – or should I say, Phil often had problems starting it. There were a few of us with jump leads that would help if we were around, otherwise a push was needed

Fortunately the drive from the main car park has slight slope to it and therefore bump-starting was not too much of an effort, though you did need to have eaten your breakfast if you were going to push the car across the car park to start with.

I say Phil had problems starting it, the funny thing is, that no one else did. It was a regular pastime to “hot-wire” it and hide it somewhere on the estate. This normally happened after a couple of drinks in the bar! Initially it was the more technical savvy people who would do it, but after only a few weeks, even the non-mechanical minded - including Dai Griffiths - had worked out to by-pass the ignition and start it, and then drive it up to the National Trust car park.

Phil had the vehicle for a year or so. I don’t remember its passing, but I do remember when Paul Goodwin and I were at the breakers yard in Exeter looking for some component or other, we spotted the poor old Standard 8 – complete with Phil’s stick-on flowers all over it, on top of a stack of rusting cars.