John Maxwell-Jones turned up in 1970 with an Isetta Bubble car. For many of us it was the first time we’d seen one in real life. With it's lack of a reverse gear, the 250cc motor-cycle engine and the front opened door, it was a topic of conversation once very other topic had been exhausted.

In retrospect it was probably more reliable than many of the larger vehicles in the fleet at the time and certainly the most economical. It regularly took John, David Hampshire and Dick Stoffel into College and John and David went home quite regularly in it to Plymouth.

Of course, being smaller than most vehicles it was also the target of some mischief.

On one occasion I remember seeing it parked on the cattle grid – sideways.

On another occasion I remember coming down to breakfast and noticed it parked on the front steps. Clearly the “gang” responsible for its relocation were frustrated by the fact that it was just alittle too large to actually pass through the front doorway, otherwise I suspect it would have found its way into the music room! When the Killerton coach arrived, those people (the one or two, together with Robin and Miriam Thomas) going into college were obliged clamber past the car In order to get down the front steps. John meanwhile, waited patiently for few volunteers to come along to assist him with relocating it to the car park.

John took all this in tom-foolery in his stride and patiently tolerated any inconvenience.

The little bubble car survived the first year but was replaced in John’s second year with an Austin A35. 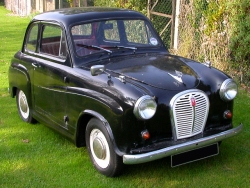