Anyone who has been to Killerton will remember that our sports pitches.  Apart from the slope away from the house, there was a quite noticeable hump in the middle - you couldn't see the penalty box in the opposing goal mouth from the other end of the field.

With the enthusiasm of youth, and a rather “bumpy” football pitch, it was decided that a team from the house should try to level 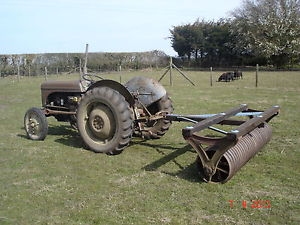 the playing field, or at least remove a few of the larger bumps. They managed to borrow a tractor and a large roller and proceeded to run this up and down the pitch.

Of course, one has to have a very poor memory to fail to recall that the Killerton rugby/football pitch doubled as a cattle grazing field, and consequently as the roller rolled, so it collected “debris” which in turn jammed the roller..

Not to be beaten, one of the intrepid team offered to stand on the frame of the roller with a spade and attempt to scrape the effluent off as the roller moved. A good idea, but with the experience of our years one has to say it would be “hazardous”.

Indeed, as the tractor and roller moved forward Banski - for it was he who offered to do the scraping (a practice he relied on heavily in later years) fell off the frame and in front of the roller!

Fortunately Chris Way was standing nearby monitoring the progress and his shout (scream?) was loud enough and urgent enough to attract the attention of  Mick Waghorn, the driver, who stopped the vehicle before any serious damage was done!