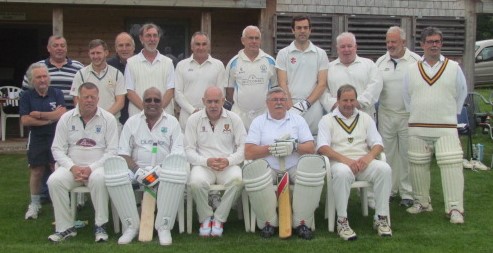 And so they came again to the KEB - the ageless,  fearless, hairless, perpetually youthful band of brothers that are Killertonians! From all parts of the globe travelling in hope to take up the challenge from the cricketing force that is Broadclyst.

From New York State, the French Alps, Cote d’Azur, from Bursa- one time capital of the Ottoman Empire- from the Dulais Valley, Pompey and Llantwit Major, from Dorset, Worcestershire, Staffordshire, Yorkshire and Essex, from North and South East and West all roads funnelled towards the stately house that is Killerton - Our stately home.

Following the now traditional pre-match tour of the Old House and wisely resisting the temptations of local hostelries in favour of a frugal, healthy, energising pre-match lunch, the team, supporters and auxiliary staff meandered nonchalantly, oozing confidence to the KEB.

Even under a slate grey sky the Killerton Estate Bowl once again looked impressive, the Broadclyst ground-staff excelling in the maintenance and preparation of the wicket and outfield. Our old ground remains in safe hands.

party - a herd of Friesians!

A virtual toss of a non-existent coin, a pensive poke at the pitch, much knowledgeable pondering about atmospheric conditions, meteorological forebodings resulting in the usual instruction for Broadclyst to bat first.

The start of play bell summoned Killerton - the fielding team- who dribbled onto the pitch, a swarm of fielders totally ignoring the traditional - some would say out-dated- limit of 11 players. Vinod Daswani recently kitted out by his personal Saville Row dresser appeared in spray on whites and Riviera Reality Stars Cricket shirt. An unusual combination. Daswani was soon on - then off - then on again - then off when Broadclyst objected to the hoards of fielders surrounding their batsmen. Daswani was sacrificed and given time to recover from his knee, hip and circulation issues. He would return miraculously to open the batting.

The new ball was thrown to the ever dependent Johnny Morgan who gliding like a thoroughbred colt quickly found his usual accurate line and length. Morgan’s new ball partner Malcolm Greenhalgh - having followed a gruelling fitness regime in preparation for the match charged in off his remodelled, longer run (5m now extended to 6m) and wrapped both openers in his sticky web of medium pace all-sorts, with no two balls the same. Morgan and Greenhalgh have become the Anderson and Broad of Killerton cricket - aging, dependable veterans.

Morgan’s accurate start - 3-0-10-0  was brought to an abrupt end when misfortune struck the steady seamer who was forced to leave the field with a pulled calf muscle. Show-off!

This brought the recuperating Daswani back onto the field despite a great deal of encouragement to stay in the dressing room for further treatment and delayed remedial assessment.

Morgan’s misfortune saw the off-spin of Brian Pinner introduced into the attack earlier than expected from the Budlake End. Pinner’s preparation for the match had been hampered by wife and golfing partner - Gail - insatiable golfing demands and competitive drive to be the best swinger.

Despite these deprivations Pinner soon found a nagging length and surprised himself with some unexpected dip and turn. Greenhalgh charged in unchanged in a lengthy spell and ended with impressive figures of 7-0-22-1, aching joints and all round stiffness.

With the light deteriorating and a sticky drizzle dampening the wicket and proceedings the pace of Steve Goodwin was introduced to test the Broadclyst clonkers.  Goodwin never gives less than 100% and in tandem with the wily Pinner soon reduced the Broadclyst middle order to tatters.

Pinner finished with veteran best figures of 8-1-35-3 and the bustling Goodwin again impressive with figures of 6-2-12-3.

Throughout the innings the fielding in the Devon gloom was nothing short of heroic with specialist outfielders Jeff Rees, Gary Page and the indefatigable Letchford saving countless runs in the deep.

Poor light, steady drizzle and a backcloth of deep green shrubbery and towering oaks made catching challenging, with a dark ball difficult to pick-up in the twilight conditions. But crucial runs were saved making the target an optimistic possibility.

And so to tea.

The Killerton innings will be remembered for the first sighting of Thomas and Vinod Daswani as opening partners. Both openers had dedicated years of preparation for this moment and were soon into their stride unfurling a series of extravagant drives, airy swipes and phantom pulls. The score rattled along until first Thomas and then Daswani were bowled playing  sumptuous drives in the vain hope of being first to the bar. Score 2 for 2.

With the score on 15 Greenhalgh Jnr stubborn resistance came to an end and Kenderick was LBW to one that kept low. With the score on 17-4 Goodwin was joined by Pinner. The talented Goodwin started his innings with sensible caution interspersed with extravagant, occasionally reckless drives. It needed the experienced Pinner to reign in Goodwin’s coltish energy and gradually, sensibly the pair started to rebuild the shattered innings and nudge the score towards the unlikely target of 129.

Despite dwindling light Pinner and Goodwin gradually increased the tempo of the innings and run rate. Pinner calm under pressure interspersed deft touches with some sparkling stroke-play until he was tempted once too often to be caught behind - again  for a stylish 32 with the total now reaching three figures. Goodwin now started to punish a wilting Broadclyst attack unfurling a range of devastating blows to reach a second consecutive half-century in the series with Broadclyst. With the overs quickly running out and the already poor light worsening, a one legged Morgan was summoned from his umpiring duties. With the help of a runner, Morgan was challenged with finishing the match and bringing it to a successful conclusion. Morgan cheerfully obliged with a series of powerful boundaries to bring Killerton home. Victorious. Goodwin, undefeated made another crucial contribution with 61 fine runs.

And so after 40 years of waiting a Killerton Cricket team were once more victorious. The long wait was over!

A memorable match with an unforgettable conclusion.

Congratulations to the all players involved with respect and admiration for all the sexagenarians still prepared to take up the challenge and travel thousands of miles to represent Killerton once more. For the organisers Steve and Alan our thanks, and for all our travelling families, friends and supporters  our genuine gratitude. Thanks also to the official match day scorer Paul Goodwin for his dedicated service and authoritative keeping and care of the ‘book’.