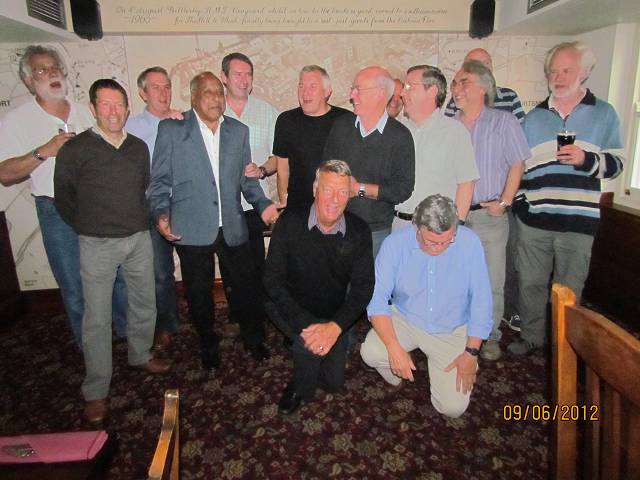 Well, another fantastic weekend and an opportunity to catch up with so many friends. We sat in the bar in the Farmhouse during the afternoon on Friday chatting as we waited for people to turn up. Malc Greenhalgh and Caroline had come down on the Thursday so he and I, together with Chris and Caroline started early. Taff, Eiryl and Sticky Leach arrived soon after ... and so the afternoon progressed. We had an email from Gem Edwards during the afternoon to apologise that he was unable to make the weekend as he was waiting to move into his house in Exeter. We also had a call from John

Davies to say that he and Janet were unavoidably detained with a family problem.

By the time we retired to the Lounge in the Inn Lodge for a meal, our numbers had swollen to include Vijay and Jeannie, Roger Herd, Tim Cottle and Flavia, Budgie and Janet Parker. In the Lounge the numbers further increased with Martin  and Sylvy Field, Dave and Cathy Robins, John and Judy Brand, and Chris Chivers.

The evening passed with good food, good company, and a not insignificant amount of alcohol.

On the Saturday most eventually decided to visit the D-Day Museum followed by a walk along the sea walls before lunch. The D-Day Museum was a bit more interesting than initially envisaged and we left in time to drive - rather than walk - to Gunwharf Quays.

We had hoped to call in at the Customs House for lunch, but the weather was a little blustery and trying accommodate a group of 20 Plus was not an option, so we relocated to Tiger Tiger - a night club overlooking the marina. Again, a pleasant meal, made all the more pleasant by the most excellent company. By now, Brian Hunt and Roger Herd's Partner - Maggie, and Monty and Maggie Hannant had caught up with us.

After lunch we went separate ways, some shopping in the Gunwharf outlet shops, some to see HMS Warrior and HMS Victory and some to ride to the top of the Spinnaker Tower.

The evening in the Still and West Inn in Old Portsmouth was (I almost tire of saying it) fantastic! Malc and Caroline Greenhalgh, Dave and Cathy Robins had left us for various family commitments but we were joined by Paddy and Barbara Barrett, Dave Halford, Chris and Melanie Chivers, and Tim's sister, Sarah.

We had a room to ourselves in the Still and West, overlooking Portsmouth Harbour entrance. The busy shipping activity was of great interest to many, and there was one keen photographer who now has a complete collection of photos of local and continental ferries.The food was good, as was the beer! By the end of the evening we managed to take team photos of the "boys" and of the WAGs. We even managed a few songs - including the Luke's Medley, for good measure!

A really, really lovely time. Janet Parker probably sums it up best - "you've all grown older, you just haven't grown up"! Thanks Janet, I think that's one of the nicest thing anyone has ever said about us