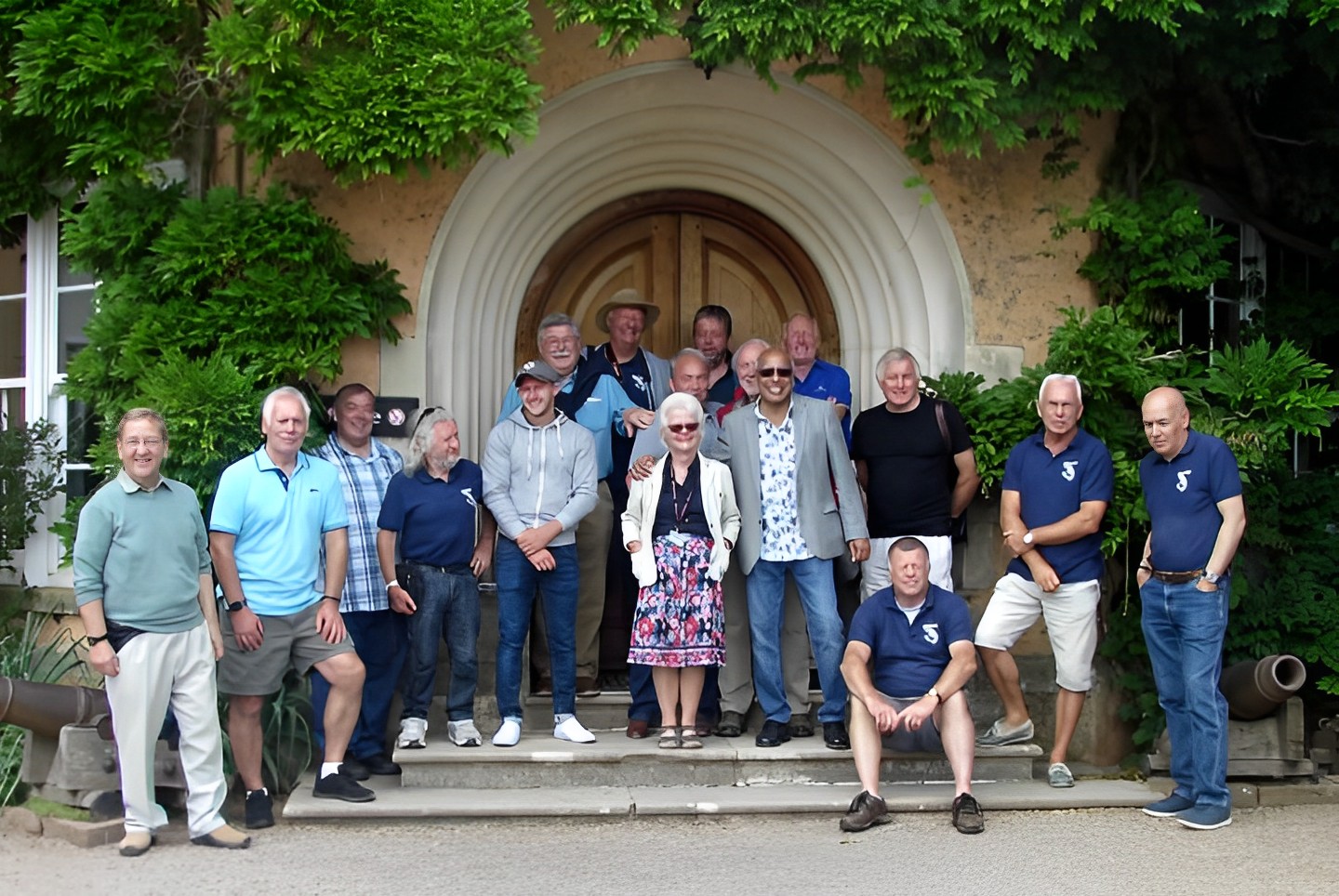 Another year and another get together.

A very successful weekend, and a very close result in the cricket match against Broadclyst CC.

We have already arranged the date for next year’s rematch so if you want to stay in Bickleigh next year then I strongly recommend booking early.

I will post the match report on the website when I receive it from our esteemed captain. I know he will be eager to praise the efforts of our highly trained and athletic team members who played with enthusiasm and dedication and a positive attitude that was an inspiration to see.

Spectators were open mouthed in their awe at the display of sporting talents.

For Chris and me, the weekend started on the Friday evening when we arrived at the Cot.

After settling in we spent a rather splendid afternoon with a pint or two on the veranda overlooking the River Exe and fascinated by the exploits of a heron fishing in the river, and the traffic vying for positions on the single-track bridge.

We were disturbed at one point by a rather loud gentleman taking over a seat on the table next to us. He had a loud conversation on FaceTime with his partner before being interrupted by people asking for his autograph and taking selfies with him. After he left we asked someone who it was – Christopher Biggins!

As the afternoon turned into evening, we were joined by Dick and Jo Allard, Brian and Gail Pinner, Vijay and Jeannie, and Jem Edwards.

The following morning Chris and went to Exmouth to visit a few local places including Rolle College (looking very sad and unloved having been boarded up for several years now while the council decides what to do with the land). Seacroft flattened long ago and replaced with retirement flats.

Orcombe Point is always a must on a visit. I guess most Killertonions are familiar with the location. It is now populated with paddle-boarders in the water and campervans on the road. The beach and the cliffs are still a wonder. The “High Land of Orcombe” is a National Trust area complete with steps from the beach to the top of the point.

After cream tea in the square we fought our way through the Exeter traffic to Heavitree to pick up Charles Fear from the Jury’s Inn then back to the Cot – and a pint or two on the veranda.

As the afternoon progressed we were joined by more and more people until time to relocate to the dining room ready for dinner.

It was probably the largest gathering of Killertonions for a meal since leaving College with 36 people dining.

The meal was good - and loud. 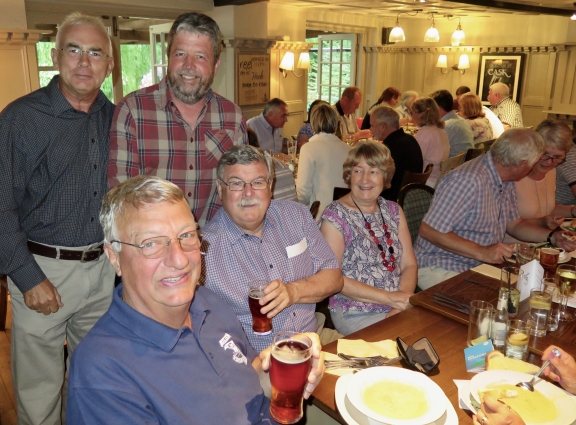 I have to confess, I’m a lightweight these days, so by ten, having eaten and drunk far too much during the course of the day, and having paid the bill I retired to bed.

From our room, we did hear a little later the dulcet tones of Taff and Dai serenading the ducks to the percussion accompaniment provided by the firework display being held at the Castle.

After breakfast on Sunday we drove to Killerton trying to avoid the kamikaze cyclist hurtling along in the opposite direction along the lanes.

Arriving at the NT carpark we were greeted by the early arrivers.

While we chatted, the number slowly grew to nearly 50.

Once we were gathered we walked to the entrance.

A brief chat with the door staff who phoned through to the House to advise Denise Melhuish we were there.

We were waived through and we wandered down to inspect the trees by the main gate. We were a little disappointed to see that one has died. A couple of rather sad looking oak leaves are fighting their way through the grass in the enclosure. It is possible that there is a recovery in the offing – not unlike Sir Richard’s own reinvention of his political career after the war.

Denise met us halfway down the drive and as ever was so amazingly welcoming.

The House is protected under a large scaffolding tent to protect it while the roof is repaired.

Owing to the work the first floor is not accessible but Denise took the time to take us around personally and tell us of the developments in the House and to relate some of the history of the family that is being revealed as they research the family and gain access to documents released by the family. It is becoming clear that the gift to the National Trust was not without its effects on the family’s life at the time.

In Dickies’s Wing, Denise is especially interested in the squash court. With 20-30 people offering their views about what was where and how it looked, how it was accessed, etc, there was a general consensus that “we weren’t really sure” … but Bob Ford thinks he may have a photo of the court so has been detailed off to find it and return it to Denise ?

Denise reminded us that she would love to have some recordings of our tales of our times at Killerton, especially any memories of Sir Richard and Lady Anne. David Treharne is going to arrange a recording studio in Exeter during the cricket weekend next year. More details to follow.

After lunch, we went to the cricket ground where we were welcomed by the Broadclyst team.

The new pavilion is settling into the environment really well, the timberwork is aging nicely.

The bar was well stocked – and this year included a barrel (I think we may be developing a reputation).

I will leave detail of the match to the Captain, but suffice to say a pleasant afternoon, well lubricated and interrupted only by excellent tea provided by the Club.

At the conclusion to the match, The Sir Richard Acland Memorial Trophy was presented to the winning team. It will be looked after by Broadclyst CC in their Trophy Cabinet (ie, behind the bar). 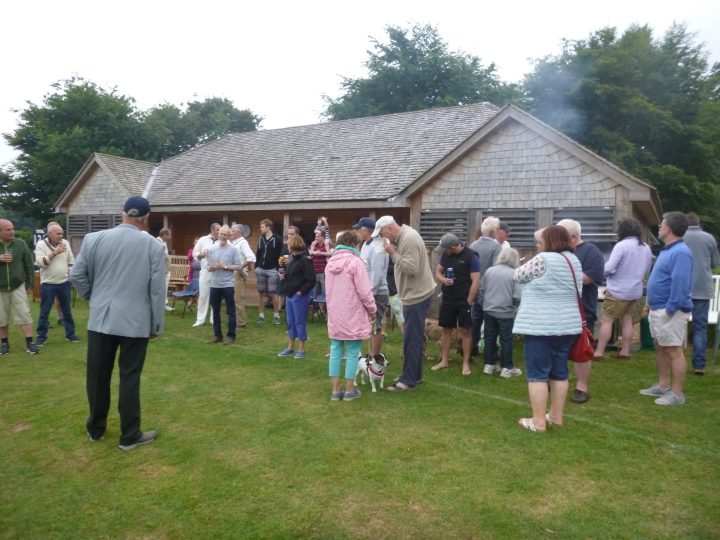 Vijay had two more trophies to present: one to the Man of the Match, that was presented to Steve Goodwin after his excellent showing at the crease, and second trophy presented to the oft unrecognised member of the squad, the scorer – Paul Goodwin. So, a family double.

The day was rounded off with a BBQ prepared by Broadclyst. An excellent end to an excellent day and a brilliant weekend.

All I can add at this stage is a very big thank you to all those who were able to attend.

I do have a few apologies to pass on, all of whom asked me to send you their best wishes:

and some had a little too far to travel: